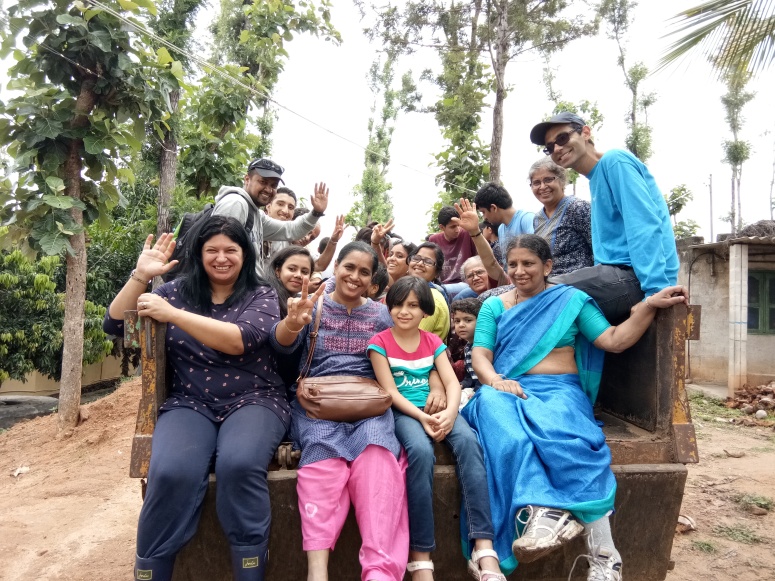 We at A Green Venture conduct knowledge based experiences and guided green tours making everyone relish farm-fresh, getting nature part of life and engage visitors to the wonders of the outdoors. Summer is the most exciting month for us with over 10-12 fruits ready for picking, especially the king of all, MANGOES! 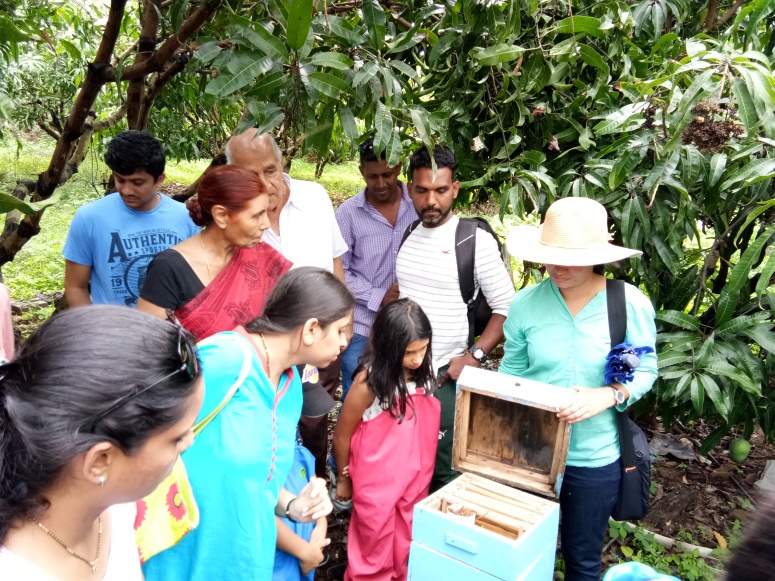 The guided tour experiences started off by visiting the honey bee area, incredible insects which form the nut and bolt for a thriving organic farm. Pollinating almost all of the fresh produce, responsible for 3/4th of the food on our plate everyday. This bee species is known as the Indian small bee (apis indica) and follow a strict British matriarchy system where they all bow to one – the queen. The queen is the reason for their very existence and forms the most important member of the colony. Worker bees make up 90% of the hive, daughters of the queen, they do all the work and have various responsibilities like scouts, gatherers, soldiers and care-takers. It takes 3000 flowers to make 1 tablespoon of honey! Known for their hardwork, loyalty and efficiency, honeybees are used as examples in orientation programmes. In the wild and at the farm they are prone to regular attacks from ants, monkeys, wasps and bugs that come after their prized honey. At the farm, 1-2 kg of honey can be harvested every 6 months. We open the box to show the honeybees, being domesticated ones these are docile than their angrier wilder counterparts which are also present at the farm hidden dangerously in a cherry bush!

As we walk on the  trail that is lined with tall silver oak and teak trees giving the path an aesthetic feel. We point out to trees on either side where lychee, mangoes, coconut, banana, lime and explain this method of planting known as Companion Planting. Apart from saving space, planting like this manner allows the soil to share different kinds of nutrients keeping soil health up, throws off pests, shaded sunlight beneath canopies are ideal for vegetable planting li ke Avarekai (Hyacinth bean) and keeps up competition between plants allowing us to harvest from the smaller trees.

Our next stop is the banana area where Chiguru grows Elakki and Pachballe varieties. Bananas are tough plants to grow organically as it requires more water. Bananas are actually herbs not trees, the bark is a ‘fake one’ as it’s soft and used in cooking and material purposes. It takes about 11 months for the banana fruit to emerge and a significant feature of this plant is that the flower and fruit grow together. The flower has the fruits already inside it and these get separated as the plant grows. Bananas have no seed dispersal like other plants, they grow from tissue culture which is part of the root making each plant a new one which is also the reason for its historical and religious uses.

Being summer the season for fruits, we get everyone to taste Umptekai ‘Indian hog plum tree’, discover cinnamon and bay leaf aroma from the bark and leaves, pick ripe red figs and break them open, enjoy the tangy flavour Barbados Cherries, the fragrant rose apple, sweet water apple, star-fruit and gooseberry’s close cousin blimbli. Some other trees that can be sighted here were Pomello, lucky soppu, kala jamun, Pomegranate, ber, maosumbi trees. 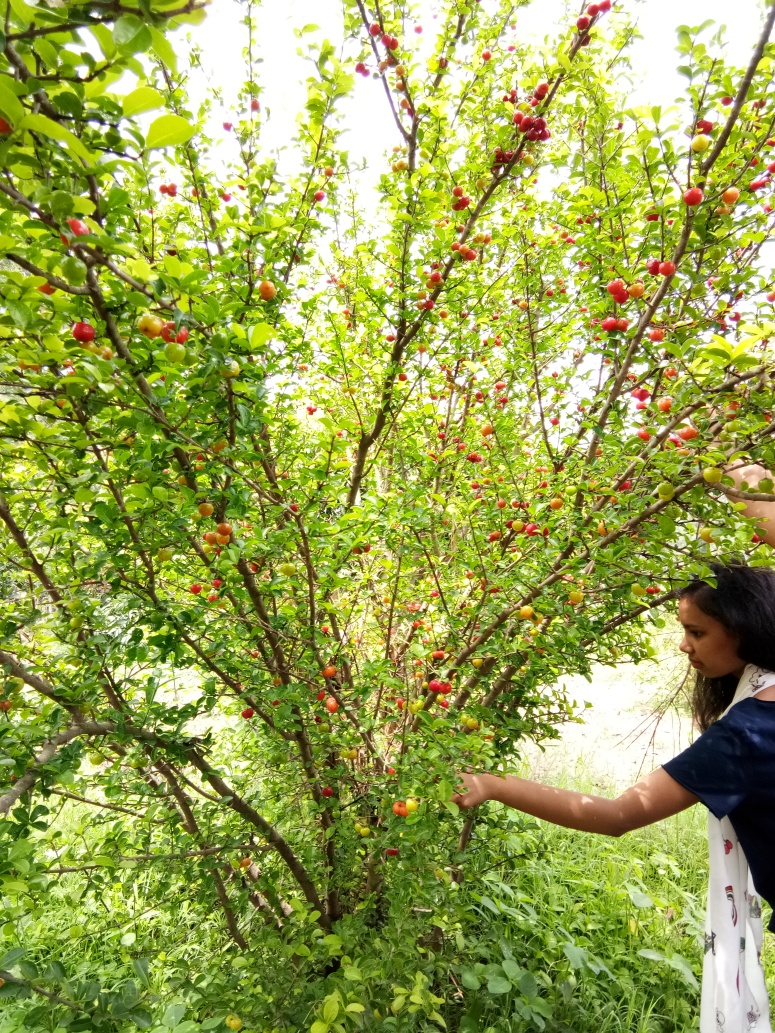 The wasp story is an interesting one where we speak about how Figs are pollinated by the female fig wasp once she lays her eggs and transfers the pollen to the flower. Subsequently, the babies hatch and only the females escape, since the males are wingless. This pollination process is unique and known as ‘Mutualism’, where two separate species depend on one another for reproduction. 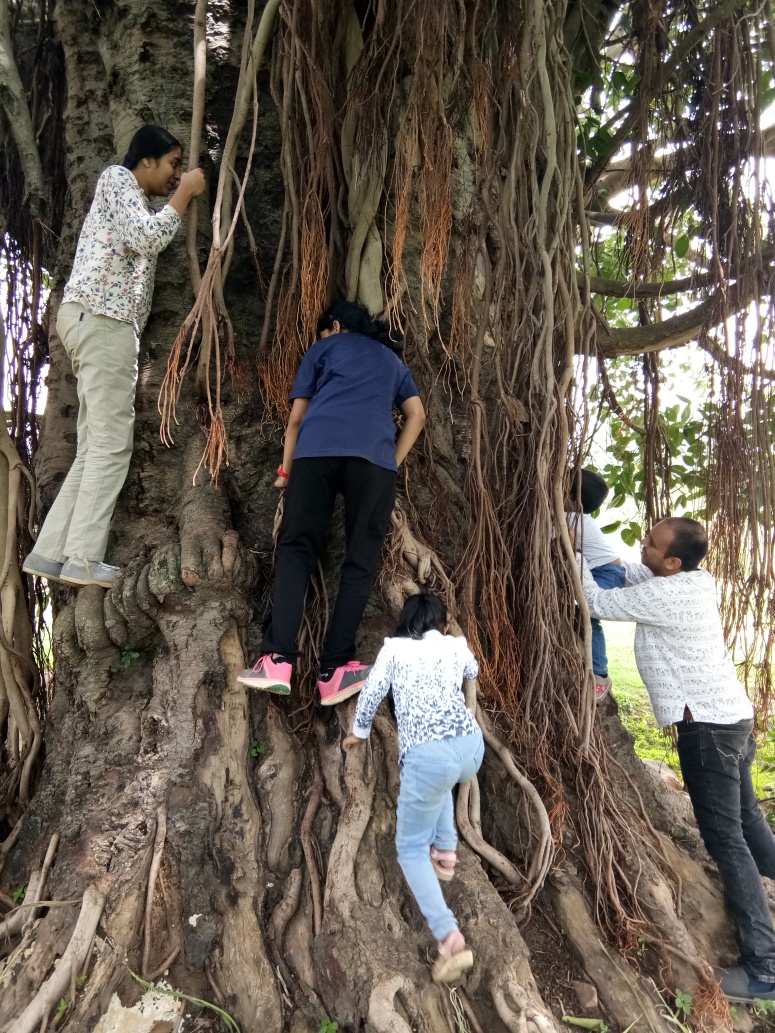 After a quick break of lemon juice and jackfruit, its meeting the 100 year old Banyan tree. Supporting over 50 species of animals, birds, reptiles this green giant has the most interesting ecosystem, high soil nutrient content around the tree and releases high levels of oxygen. The banyan tree comes under the fig species, its prop roots are important as the tree ages. With the group there is an immediate sense of calm and serenity by just standing under the huge canopy. Till date, this wonder is still revered, worshipped and offered prayers regularly.

The wriggly worms from the compost pit refuse to show themselves, Earthworms known as friends of the farmer are used to convert vegetable waste into organic manure known as ‘Castings’. This magical material is responsible for the high humus content in soil and what agriculture used to be like back in the day. As a result, plants grow stronger, better immunity and turns disease resistant. We get you to hold, smell and feel what vermicompost is like which many exclaim as earthy smelling, and one said, ‘Smell like Bangalore rains’.

The last stop for the day is farms very own Indian desi native cows. Known for their rich manure microbe content and higher milk quality in comparison to their exotic crossbreds, native cows have been rigorously introduced into the Indian dairy market for the past few years by our government through their misplaced agricultural schemes and policies. The issue with the exotic cross bred cows are that they have A1 beta casein according to the latest scientific researches is known to be addictive trigger schizophrenia, diabetes and cardiovascular diseases. ***

After the hearty meal, we laze around and play traditional games such as lagori and spinning the top,  for some time before setting out for the final and most sought after activity of the day – Mango picking! The simple rules of mango picking are:

Identifying mangoes is important; 1) They need to be coloured on top – Red to light yellow 2) Using a pair of snipers or your hand cut the stem 4 inches above the fruit

Mangoes picked are put into baskets, immediately washed and then sorted. One of the best things about the king of fruits is the fragrance of fresh mangoes. 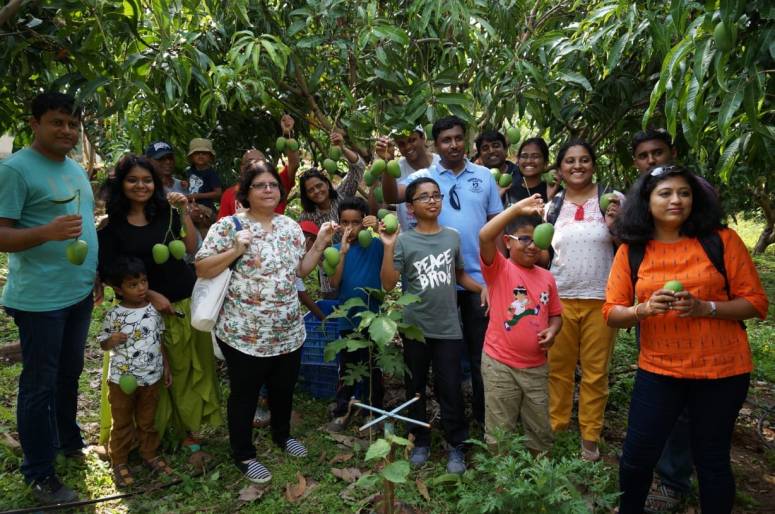 The farm trail is concluded by the evening tea. There is a sense of joy and renewed energy for having spent time meaningfully connecting with the nature that gives us our food and our sense of well-being.